Posted on September 9, 2012 by William Hederman 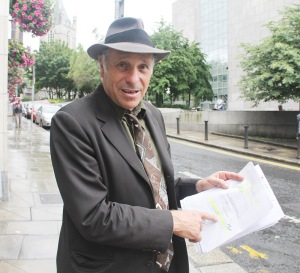 Ireland is totally unsuited to the process of hydraulic fracturing or ‘fracking’ to extract natural gas, according to the best-selling author of a book on the global oil and gas industry. Greg Palast, a renowned investigative journalist, said there was “no chance whatsoever” that US regulators would allow the controversial process in the kind of terrain for which it is proposed in Ireland.

“You may think American regulators are bad – and they are, they’re in the pockets of the oil industry – but even the worst of them would not allow fracking in areas like those proposed for Ireland,” he told Liberty. “If you took the counties where fracking is proposed in Ireland and stuck them down in the middle of the USA, there is no chance whatsoever that they would allow any drilling there.”

Fracking involves pumping tens of thousands of gallons of water, mixed with chemicals, at high pressure into shale rock in order to fracture the rock and release natural gas. The process has been banned in France and Bulgaria, as well as several states within the US, Germany, Canada and Australia.

Three companies have been given preliminary authorisations to explore for gas in parts of 12 Irish counties, including Cavan, Leitrim, Roscommon, Sligo, Fermanagh and Clare. One of the companies, the Australia-based Tamboran Resources, has said that fracking is the only way to extract this gas.

These areas have seen a growing campaign of opposition to fracking, due to major health and environmental risks, including possible contamination of water supplies. Five Irish local authorities have voted to ban fracking.

Palast was invited to Ireland by the No Fracking Ireland campaign and spoke to packed audiences in Enniskillen, Carrick-On-Shannon and Dublin. He says that when he visited some of the areas of Leitrim and Fermanagh for which fracking is proposed, he was shocked. “In the areas of the US where most fracking takes place, you can drive for days without seeing anyone. There are no people, there’s no water.”

In May, a preliminary study into fracking in Ireland by the University of Aberdeen for Ireland’s Environmental Protection Agency (EPA) identified potential risks to groundwater purity and tremors or earthquakes. Minister for Energy and Natural Resources, Pat Rabbitte, has said no fracking will take place here before a much more in-depth study is carried out.

Palast says the Aberdeen University study was misreported by the Irish media. “What the Aberdeen study said is that nobody has studied this: nobody knows about the geology, the water tables, nobody knows anything. You’re digging a hole and you’re wishing.”

Tamboran has said it will not use any chemicals during fracking in Ireland. However, campaigners argue the company has yet to show that it will be possible to frack without chemicals. Furthermore, as Palast warns: “Even if you don’t use chemicals, nature does. There are poisons that nature has locked away for many thousands of years and we’re unlocking it.”

Palast, who has been investigating pipeline explosions for more than 20 years, initially as a US government investigator, warns against “destroying Ireland’s tourism potential for a few quick bucks”.

His latest book, Vultures’ Picnic, explores how environmental disasters such as BP’s Deepwater Horizon oil spill in the Gulf of Mexico in 2010 are caused by corporate corruption and failed legislation. Following the Deepwater Horizon disaster, he discovered that an identical blow-out had occurred two years earlier on another BP rig in the Caspian Sea but was covered up by the company.

“If you trust oil companies, talk to the people of Louisiana about trusting BP,” he says.

This article was orginally published in the July 2012 issue of Liberty, the newspaper of the trade union SIPTU.